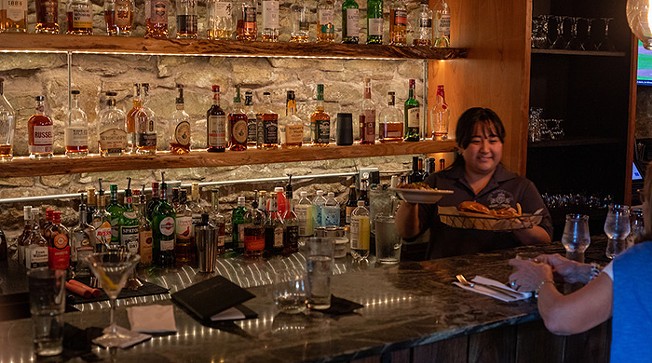 house in the woods

I’ve wanted to try the Woods House Historic Pub in Hazelwood since it opened a bit boldly in the first year of the pandemic. The establishment advertises itself as “a traditional pub with a Scottish accent”, and having grown up in the north of England with a large family in Scotland, I was understandably intrigued.

Pittsburgh, like every city in the United States, has its share of Irish and Scottish themed pubs, but most are essentially American bars that sell Guinness on tap and serve cottage pie incorrectly listed as a pie. shepherd’s pie (cottage pie is made with ground beef and shepherd’s pie). contains ground lamb). But the painstaking restoration of an 18th century stone house as the site of Woods House has given me hope that the owners have worked just as hard to recreate Scottish cuisine.

Visually, Woods House fully captures the character of a public house. From the outside, it’s an unassuming farmhouse that could blend in with any average village in the British Isles. Inside, thick stone walls dotted with small windows and low exposed rafters frame a small bar with limited dining capacity. Although we enjoyed our meal in the soft evening sun from our seats on the terrace (not a guaranteed experience in a true Scottish setting), it would be worth another visit during Pittsburgh’s harsh winter season to take advantage of the cozy effect so well achieved inside. The bar, I am happy to report, was stocked with an admirable selection of Scotch whiskeys to complete this long awaited experience.

But the food, while good, can hardly be described as authentically Scottish. A few entrees are distinctly English (bangers and mash, Scotch eggs – yes, a Yorkshire creation despite the misleading name), one is Welsh (leek and potato soup) and another, fish and chips, is a popular favorite in all of Britain. Seafood, salmon and mussels, would be welcome items on any Scottish menu, but the descriptions hint at continental preparations and pairings.

Hoping to critique the food at least in part for its Scottish authenticity, I opted for the fish and chips. This working-class favorite is, in any case, a staple of UK coastal towns, and some of the best I’ve had have been served north of the English border. It seems worth pointing out here that fish and chips, despite its legendary reputation in British cuisine, is said to have been first introduced to London by Jewish immigrants of Portugal. So it seems fair to treat this as an adopted British dish open to new exports and adaptations.

But again, let me contradict myself. I’ve yet to order a portion of fish and chips from the US that didn’t turn out to be fish and chips, and I’d praise any outlet that goes against that tendency. I placed my order at Woods House with a slight hope that this would be the one – but alas.

Still, the fries were excellent. Hot, crispy, soft inside and tastefully seasoned. They were exquisite when dipped in the homemade tartar sauce, which allowed the right balance of dill and lemon to cut through a rich, creamy mayonnaise base. But they would have been much better served in their natural surroundings alongside a steaming burger brimming with cheese, mustard and pickles.

French fries – that is, British chip shop fries – should have an almost opposite profile to fancy fries: thick, lightly browned and just a little soft while still retaining their shape. They are not inherently superior to other varieties of fried potatoes, but they are an irreplaceable part of the fish and chips experience that I hope to find in any restaurant proclaiming authentic Scottish cuisine.

So much for fries, how about that fish? Here, Woods House holds its own against any Glasgow chippy. The batter is light and crispy with a rich golden hue. Under the batter, the fish is so juicy and tender that it flirts with raw.

It was a pleasure to accompany it with a pint of Tennent’s lager – not the most outstanding beer on the market, but distinctive and hard to find outside of Scotland. Its sweet, malty profile is not far off from an American pilsner and pairs well with a heavily fried starter.

I ended the meal with a frankly disappointing serving of crème brûlée. The custard had a good flavor, but to enjoy it, you had to walk through a slab of burnt glaze the depth of a coin. It was an unfortunate ending to an otherwise enjoyable experience.

To be clear, although not significantly Scottish, the food was good. The setting was even better. And I look forward to returning when the weather turns, allowing the sturdy stone interior to exert its warm mystical charm. And let’s not forget that glass of whiskey.