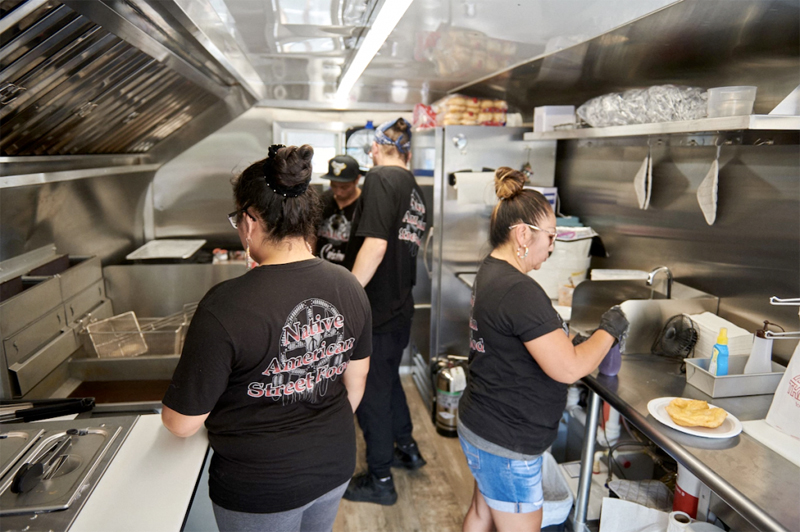 Each time the food trailer is taken out, it features flags from different tribes and is covered in artwork depicting ancient Native Americans, eagles, medicine wheels, and other important Native American symbols. People inside are cooking fried bread, bison burgers, NDN NAICCO tacos and pouches. The various flags are interchanged to reflect and honor the people working in the food trailer, as well as those who call NAICCO home. Some of them are for remote places in Ohio: Yakama in Washington, Warm Springs in Oregon, the Rosebud in South Dakota, etc.

Columbus, Ohio probably isn’t where you’d expect to find a Native American food trailer; neither the city nor the state is known to have a large indigenous population. The Native American Indian Center of Central Ohio (NAICCO) is trying to change that. In 2020, the organization opened a food trailer called NAICCO Cuisine, through grants, and has been selling food in central Ohio ever since. The first year was good. “When we had our last day on October 11 [of 2021] we staggered the day from 3 to 7 [p.m.]but the queue was so long in the alley that we didn’t serve our last customer until after 9:00 that night,” Ty Smith, NAICCO’s project manager, told me.

In other parts of the country, there has been a growing movement to serve and recognize Indigenous cuisine. Owamni in Minneapolis focuses on indigenous foods, especially those eaten before European colonization of the Americas. In Denver, Tocabe is a Native American fast food restaurant that becomes a chain. Some places, like Cafe Ohlone in the Bay Area, favor foods that are locally sourced and made with traditional ingredients. Portland, Oregon has bison cafee, which only works with Native American coffee roasters and organizes community events to benefit Native artists or raises funds for communities like the Warm Springs Confederate Tribes.

These places raise public awareness of Aboriginal cuisine, but they also reveal new questions: what does “Aboriginal cuisine” or “Amerindian cuisine” mean when there is not and has never been a culture or a history? homogeneous “Native American”? What makes a food “traditional” and can this change over time? How should Native American cooks approach foods and ingredients that may not be traditional? There are no easy answers to these questions, and depending on who you ask, you might get very different answers.

One of the painful ironies of the history of food in the Americas is that Western Hemisphere ingredients are ubiquitous in modern cuisine, yet Indigenous eating habits remain outside the mainstream.

Columbus is in some ways the perfect place to try to figure it all out, in part because the city reflects many complex factors that affect Native Americans today. Most Native Americans not live on tribal reservations, but rather in cities. Native American urban communities tend to be inter-tribal, made up of many different groups, and NAICCO is an inter-tribal agency. Meanwhile, only 0.3% of Ohio’s population is Native American. This, combined with the lack of a Native American community infrastructure, creates a degree of invisibility and a sense, among many Native Americans, of being subsumed by the dominant Western culture. As Smith said, “A lot of people in central Ohio really aren’t aware of our presence.”

One of the painful ironies of the history of food in the Americas is that Western Hemisphere ingredients are ubiquitous in modern cuisine, yet Indigenous eating habits remain outside the mainstream. This is partly due to a degree of invisibility in the larger discourse, especially in parts of the Midwest. Part of this is also due to diversity. Native eating habits were not uniform before the arrival of Columbus-Navajo cuisine differed from Nez Perce, which in turn differed from Shawnee, and so on.

This feeling of invisibility is not new to the Native Americans of Ohio and refers to the arrival of Euro-Americans in Ohio. When the United States was still young, Ohio was considered “Indian Country” and part of the border. The Shawnee, Kickapoo, Lenape (Delaware), Miami, Ottawa and others inhabited what became the state of Ohio. The Northwest Indian War began in 1785, when tribes banded together to form the Western Confederacy and resisted American encroachment in the Great Lakes region. It ended 10 years later with the Treaty of Greenville. The tribes were forced to cede most of Ohio, retaining some land in the northwest corner of the state. That didn’t stop white settlers from trying to take what was left, leading to more conflict during the War of 1812.

The pan-tribal resistance effectively ended due to the defeats suffered by the tribes and the death of the Shawnee chief Tecumseh. After the War of 1812, a succession of treaties and agreements dispossessed the Amerindians. Individual groups like the Shawnee lost all of their land in exchange for reservations. Even these reservations did not last long. In 1830, Andrew Jackson signed the Indian Removal Act, which removed Native Americans from their land holdings in the territory west of the Mississippi. The remaining tribes in Ohio were forced to abandon what was left of their land and move to Oklahoma. In Ohio, this means that today there are no federally recognized tribes or communities. 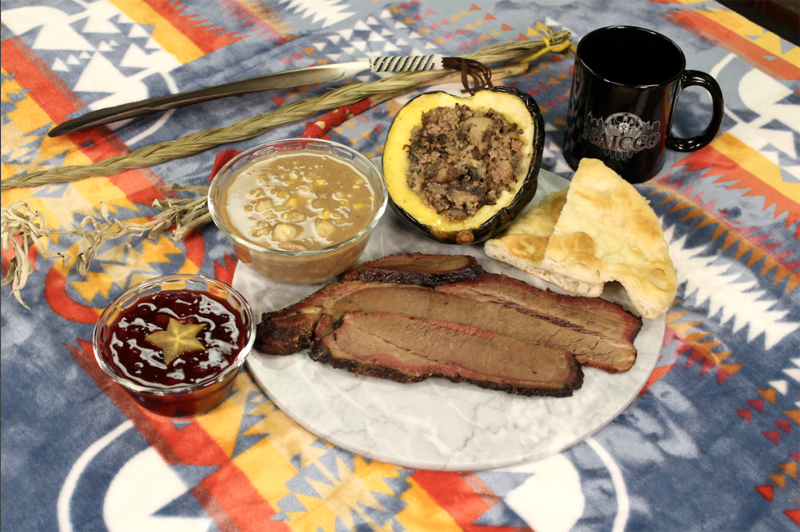 In the mid-twentieth century, Native Americans began to move in greater numbers to cities and urban areas. The federal government encouraged this with programs like the Indian Relocation Act of 1956, in part out of a desire to weaken tribal structures and governments by assimilating members into broader American society. But he also happened organically when people were just looking for work and going to school. When they arrived in Ohio, community supports had to be created on the fly. (They can also be flimsy: Cleveland had a center for Native Americans, but it closed in the 1980s.)

Enter NAICO. The organization was founded in 1975. “It all started with a woman named Selma Walker from the Yankton Sioux tribe in South Dakota,” Smith said. “She came to Columbus through her husband, who was in the Air Force. At the time, there was no Native American presence in central Ohio. people wasn’t easy, because they had no connection to each other. “They were going to ‘hunt Indians,'” Smith said, “visually looking for other Indians to invite into the fold.”

Ty Smith and his wife, Masami, took on leadership positions at NAICCO in 2011, managing a project called Circles of Care, funded by the Department of Health and Human Services. “An important part of this project was a needs assessment, and from that later came a master plan. Culture, community and economic development were the three main components that came out through the voice of the people. Prioritizing culture was especially important, according to Smith, because of their place in the community. “We are an invisible population, and we are invisible not only to others, but also to ourselves. It is difficult to notice and recognize someone who is aboriginal. We can be misinterpreted as a variety of other ethnic groups in many ways. We knew we had to make sense of ourselves and our presence.