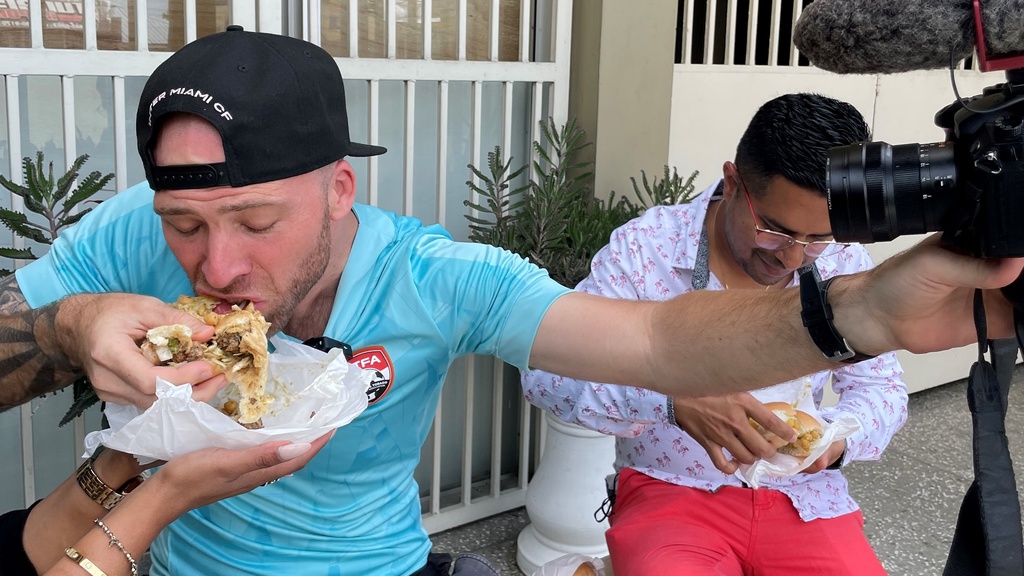 On the fifth day of his visit to Trinidad and Tobago, David Hoffman hit the proverbial wall.

After spending about three hours filming Aunty Doll in her famous Chula kitchen in Siparia and tasting the 21 dishes she cooked, which included paratha, pepper roti, dhalpuri, ham, macaroni pie and saheena, he settled in a hammock and fell asleep.

It was the first time in his culinary adventures in Trinidad that the amount of food and carbohydrates took him out.

Hoffman is an American food vlogger who spent the last week at T&T walking down the rabbit hole of the different foods the country has to offer.

Popular dishes such as Patsy’s Bake and Shark on Maracas Bay, wild meat doubles and roti cooked by the Caura River, channa sandwiches at Nick’s Café in Charlieville and Scorpion pepper ice cream at AJ’s, Hoffman ate his way through the twin island.

“Trinidad is the food capital of the Caribbean,” he told Loop News when we joined him on his culinary adventure on Wednesday. “Obviously I haven’t been to every country in the Caribbean, so please don’t be mad at me, but this is a foodie destination.”

T&T is the third country he has visited in the past six weeks and his 87and globally.

“Trinidad has been on my list for a long time. I have a list, it’s basically all the countries I’ve been to and want to go. Obviously the pandemic interrupted the course but last year I saw things start to open up and I posted it on my community wall that I was looking to go to Trinidad and all the world was like Chef Jason Peru was your man,” said Hoffman, who enjoys connecting with locals on the ground to help him have an authentic experience.

“When he contacted me via Instagram, I researched him and when I saw the kind of work he did, I was amazed that he did it out of pure love and passion. for the food. We traded numbers and it took three months to plan it, but we knew it was going to blow up and be extremely amazing,” Peru told Loop.

Along with his friend, popular foodie David Wears, Peru came up with a plan for Hoffman that took into account diverse ethnicities, cultures and geographic locations.

Before his trip, Hoffman, through his Trini friends in the United States, knew that our society was a fusion of ethnicities and he tasted doubles in Little Guyana in New York.

“But until you get here, you don’t know anything,” he said, citing people as his biggest surprise.

“I’ve been to countries where it’s really difficult because people are not accommodating but here, from the second I landed, going through immigration, people were so welcoming. I travel for the culture and the food, but the people are what make the travel experience. Without the people, the experience is incomplete,” he said. 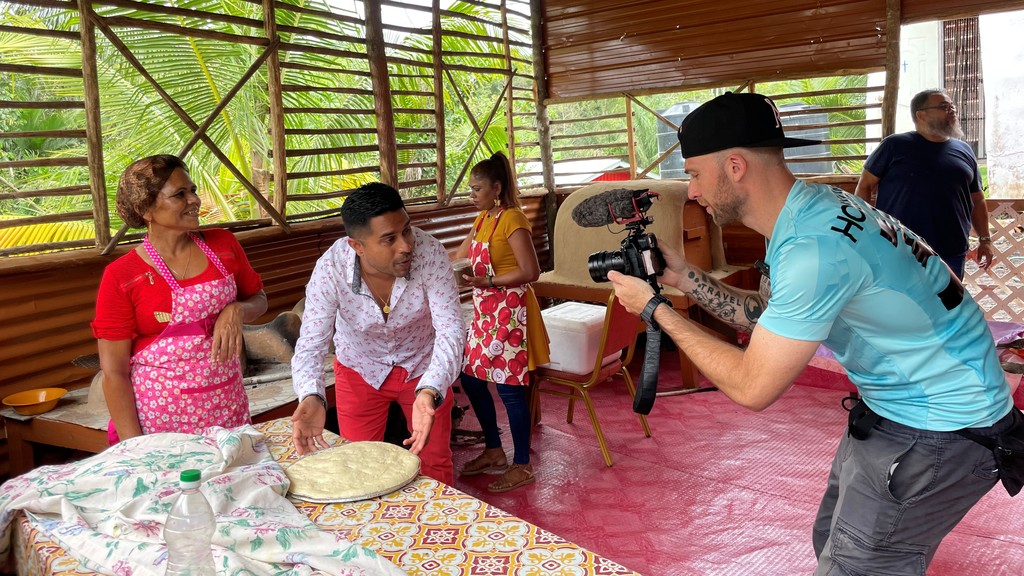 While he said the double is his favorite, he described Bake and Shark as amazing.

“This is my ultimate seafood sandwich. I’m a big fish sandwich guy, but this was out of this world,” he said.

Hoffman started his YouTube channel in 2008 as a basic travel vlog, but in 2017 he focused more on food when he realized the content was getting the most views.

His main goal, he said, is to get people to go to the places he features.

“I’m really proud to come out, to dive really deep into the culture. I’m here alone and I’m always with locals so I really immerse myself in the culture and that’s what I want to convey to my audience, really show them that it’s a safe country, there’s amazing food, great people, that’s why you should come. I always emphasize positivity, I’m not into negativity, politics, I just really want people to understand that even though every place is different, we’re just people,” he said. Explain.

When asked if he saw any similarities between T&T’s food and what he had in other countries, Hoffman said the main comparison was with India where he had been five times.

“Double is like Chole Batura, it’s a breakfast dish, massive puri with channa. I think double is better because it’s tasty with the mixture of peppers, chutneys, tamarind but I see a lot of fusion, especially from India, and then you have Chinese food, Venezuelan food with ingredients from Trinidad, so you have this beautiful mix. The food here is amazing,” he said.

Hoffman, whose parents are Venezuelan, also had the chance to sample authentic Venezuelan cuisine at Anndres Restaurant in Chaguanas.

“Amazing experience, the food is as authentic as it gets, it was delicious,” he said.

Watching Hoffman navigate his camera, adjusting the lens with one hand as he swallows dhalpuri with pumpkin from the leaf Aunt Doll has laid the food on, it’s clear that while he enjoys tasting the culture of others, creating content is work.

The 36-year-old man, who was named in the Top 10 Best Travel Videographers by USA Today, Top 10 Travel Video Sites by OOAWorld and awarded the Travel Video Alliance Award for Best Food Video/Series in 2020, says his work is hectic. His team posts at least two videos a day and although YouTube is his main platform, he also creates content for Tik Tok, Instagram Reels and Facebook.

Between monitoring edited products, he’s a lot on the road. Over the past six weeks, he has traveled to Lebanon and Oman while returning to Miami to spend time with his two daughters.

After Trinidad, Hoffman has tentative plans to visit Nicaragua, Iran, Guyana and Saudi Arabia in the coming months.

As he makes money on all social media platforms from watching his videos, Hoffman is diversifying his brand into products. By the end of May, he will launch his own line of spicy sauces made with pineapple and guava and has a long-term vision to get into real estate around the world to help boost tourism.