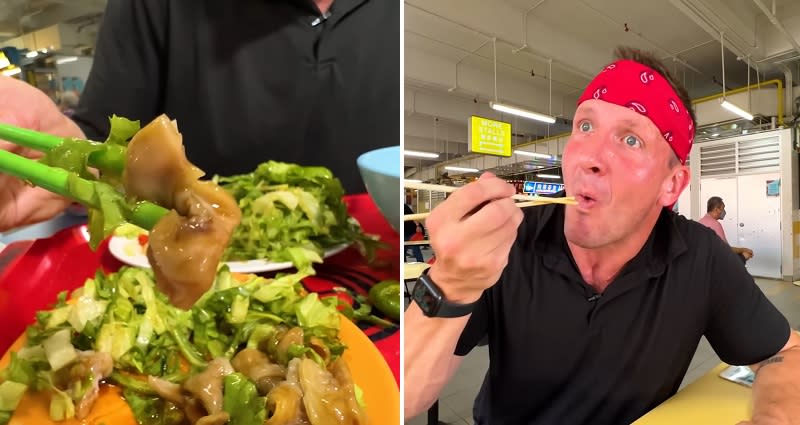 The first was Joo Chiat Beef King’s Braised Beef Tendon, which Sonbuchner describes to his viewers as the cow’s “Achilles’ heel.” The YouTuber says the dish’s sauce is “so gooey, rich and delicious” with a “satisfying mouthfeel”.

“It’s one of the coolest things you’ll ever find in the United States, unless you’re in a Chinese restaurant,” he adds.

Passing from one hawker to another, Sonbuchner comes across a stall offering a wide variety of soup options, including a dish called “pork rib soup with cucumber” which he tries on camera.

Although he states that cucumber is his “least favorite food of all time”, he tries the soup and calls it “pretty delicious”. He goes on to mention that the cucumber skin in the dish has a “sandpaper” texture.

Some YouTube users commented on Sonbuchner’s video to inform him that only the flesh — not the skin — of the cucumber should be eaten.

Sonbuchner also tries the fishmouth soup from the same hawker stall. This dish features pork intestines and fish bladder soaked in the same bowl of broth. The YouTuber describes fish bladder as something like “fried, boiled tofu” with a spongy exterior and a crispy middle.

Of all the dishes he tries, the YouTuber considers pig’s trotter his favorite.

After pig’s foot, he tries food from other stalls, including pig’s fallopian tubes, cuttlefish with peanut porridge, fried fish skin, and jellyfish.

Describing the dish with fallopian tubes, Sonbuchner says it has a “thick, super flavorful and sweet sauce”, while the texture of the tubes is “chewy, almost like cartilage, but not so crunchy”.

“I love it,” he says after his first bite.

Many Singaporeans in the comments section of the video were happy to see Sonbuchner in their country. Some YouTube users have even given the food vlogger recommendations to check out when visiting the Southeast Asian nation.

However, some commenters mentioned Sonbuchner’s use of the word “exotic” in the title of the video, with one commenter saying he was glad the YouTuber didn’t actually have “real Asian exotic meats”.

“Great video as always,” the YouTube user wrote. “None of these meats are really exotic (chicken, beef, pork, fish). They just used parts unfamiliar to 1950s Americans. On the other hand, it would have been pretty awful if you were actually eating exotic meats often found in Asia (dogs, civets, pangolins, sea turtles, etc.) so I’m glad you don’t actually have real Asian exotic meats. ”

“The funniest thing about this whole video is that I don’t see any exotic or extreme food, just delicious food,” another YouTube user wrote.

Image selected via More from Best Ever Food Review Show