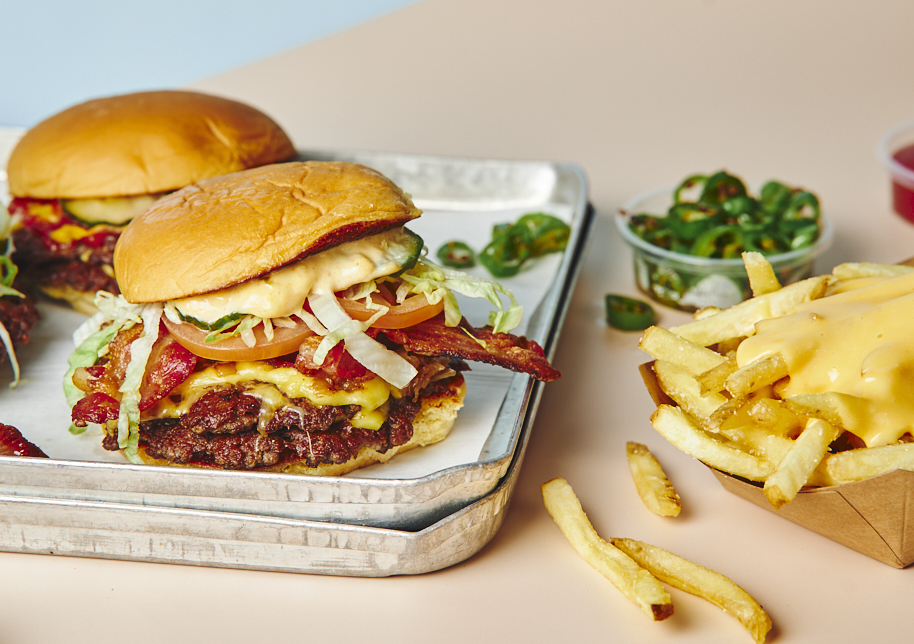 BBQ, bagels and pies: where to find American food in Berlin

I say, friends: If there was ever a time to feel patriotic about our ex-home country, there is no longer. But heavily armed dystopian theocracies can still produce finger-licking good food, and on top of that, the folks whipping up barbecues, bagels, breakfast burritos, and other delicacies sorely missed in Berlin are as pissed off as you are by the current situation. Here are our top picks.

After almost a decade, Thin bagels, the bakery and café of the Shakespeare & Sons bookstore, still makes the best New York-style bagels in Berlin. Hand-rolled and boiled before baking, with a shiny, lively skin that gives way to a soft, chewy interior, Laurel Kratochvila’s creations are best eaten fresh – or immediately frozen, then reheated in the oven the next day. Take a batch straight home or have one on the spot topped with avocado, hummus, fancy cream cheese or classic lox and a schmear.

A close second is Treptow’s newcomer Masha’s Bagels, where New York-born owner Alex Frons tops off her doughy rings with a whole megillah of Jewish charcuterie: challah sandwiches, matzo dumpling soup, seriously believable dill pickles, and a damn tasty chocolate babka for dessert. . Head out on the weekend for a Russ & Daughters-style “appetizing platter” laden with smoked and salted fish.

Chicago Williams and Big Stuff are Berlin’s barbecue veterans, but the best pitmaster might just be Lino Brandi, an American-born German who honed his craft in Austin before moving to Wedding. The style is Texan, of course, which means brisket (from American Angus beef), ribs (from German pork) and homemade jalapeño sausage, long-cooked over oak logs until deliciously smoky and tender. . Your best bet is a plate full of everything, eat like a caveman with pickles, onions, and a spicy-sweet sauce. Then, return for Pastrami Friday, a monthly (and always sold-out) event featuring brined-then-smoked peppered beef, homemade sauerkraut, and dill pickles.

Crisp, crunchy fried chicken (or halloumi), coated in a mix of purple spices and served in a flaky biscuit with honey butter and pickles: this is Southern comfort at its best, even if the level of heat is enough to make your taste buds cry. . Original founder, Tennessee native and new mom Sarah Durante recently handed the keys to her food truck to DC-born chef Chris Haskins, but you can bet those Nashville-style sandwiches will stay on the menu, just like the namesake pies, whether lime, apple or pecan. Look for the red wagon at street food events throughout the summer.

Former Humble Pie chef and DC native Chris Haskins isn’t just frying up a mean chicken, he’s also whipping up a heck of a deli-style sandwich, loaded with toppings like brisket, pastrami, pulled chicken, or cabbage. vegan fried flower. At his restaurant-within-a-bar at the Manifest Taproom, you can pair it with sides like mac and cheese topped with Flaming Hot ch**tosand wash it down with one of over 20 craft beers on tap.

“Fuck you with your craft beer; where is the PBR? It’s here, under the S-Bahn arches across from Alexa, in this brick-and-mortar store run by the bluntly named online importer. Shelves are stocked erratically, but with a bit of luck you might find Lucky Charms, Hidden Valley Ranch Dressing, Old Bay Seasoning and Barq’s Root Beer alongside the expected selection of sweet candies and even drizzles. a non-food section for those thirsty Bounce dryer sheets and Reese’s flavored lip balm.

Perhaps the most unique offering at this fast food outpost from the House of Small Wonder team is the mochi fries, but let’s not forget the iconic mini burgers of Japanese-American fast food. Whether Harold and Kumar lived in Berlin instead of New Jersey, they would head straight for those ethereal fluffy buns, stuffed with golden beef or vegetable patties, fried chicken or shrimp croquettes.

Forget the rare steakhouse-style burgers of years past: today’s must-have patty is thin, golden and deliciously crisp, the result of being “mashed” on the griddle so it is forced to fry in its own fat. If you haven’t tried it yet, consider McDonald’s – not the true fast-food juggernaut, but your rose-tinted childhood memories. At this Graefekiez stand operated by the fry maestros of Goldies, it’s been upgraded with locally slaughtered beef, house-made pickles and cult-favorite squishy potato rolls (but problematic) American brand Martin’s. Although not exactly mind-blowing, the wee burgs are worth their €7-10 price tag (that’s before adding a side of fries, which in this place are almost skimpy). For vegetarians/vegans, the plant-based patty tastes meatier than McD’s real one.

You don’t have to fold these oversized, thin-crust triangles in half, as the New York cliché goes. But at least don’t use a knife and fork. Israeli New York chef Jonathan Margulies (brother of Crackbuns Shaul owner) opened his Mitte pizzeria in the depths of the 1.0 lockdown, and Berliners looking for comfort immediately started flocking there for the small but mighty selection of cheese, meat and vegan pies – including one with real American-style pepperoni and an Ottolenghi-inspired meatless dish with butternut squash, caramelized onion and za’atar. Also don’t miss the Detroit-style squares, thickly crusted with cheddar cheese, and knots of leftover pizza dough slathered in miso or garlic butter.

Best Casual Meal: Is she

The seasonal vegetables and meat at this casual Prenzlauer Berg restaurant may be German, but the ambiance (and incredibly friendly service) is purely American. Bring the whole family for veggie sharing plates, a Caesar salad, and creatively garnished wood-fired pizzas — like the three-onion version with roasted, charred, and pickled alliums. Finish with a salted caramel ice cream sundae.

When it opened in 2018, the corner bar across from Monbijoupark was meant to be a temporary station for Susan Choi, teasing a full-fledged restaurant inspired by her busy American-Korean fusion pop-ups. Instead, the drinks have taken on a life of their own – like the instantly iconic Kimchi Michelada, which arrives paired with a tomato and kimchi frozen pop, or the Makkeolli Spritz, an apricot-tinged fizzy drink made from traditional rice wine. It doesn’t mean you’ll be hungry. There’s usually some kind of food pop-up, whether it’s gourmet hot dogs or brunch with Korean fried chicken and waffles, and if all else fails you can open a jar of Choi’s homemade kimchi.

Friendly atmosphere, frozen margaritas, barely a bit of cigarette smoke or a word of German to find… in the middle of the glass Neubauten from Möckernkiez, this local gastropub proves that you don’t need country music or trucker decor to be a true American bar. In addition to these machine-blended margins, owners Melissa and Christian Günther, from New York and Potsdam respectively, have amassed a collection of bourbon, rye and agave spirits rarely seen on this side of the Atlantic. , to sip directly or as a speciality. cocktails like the mezcal-hibiscus concoction “El Jefe”. But most come for the food. Finally, here are the homemade tater tots, those crispy and creamy potato nuggets made famous by school canteens and Napoleon Dynamite. Then there are the Buffalo Wings – made with fried chicken or cauliflower, coated in a tangy finger-licking sauce and served with the requisite blue cheese, carrots and celery – and snacks from Mexican influence like freshly fried tortilla chips with homemade guac and salsa, elote-style roasted corn, and, at Sunday brunch, a very legit breakfast burrito.

The women behind this café-bakery are Canadian and Vietnamese, but for chewy brownies, chewy chocolate chip cookies and other sweet treats that owe their texture to the alchemy of baking soda, look no further. An outlier of Reuterkiez when it opened 10 years ago, the cheerful blue spot now fits right in among the chic restaurants and cafes that line Friedelstraße (including its own sister restaurant, the Middle Eastern-themed Kitten Deli). East), and remains as popular as ever with Neuköllners and American expats in search of carrot cake, whoopie pies, bagels or BLTs.

Want more food news from Berlin? Subscribe to our weekly newsletter and get the latest food stories delivered to your inbox.