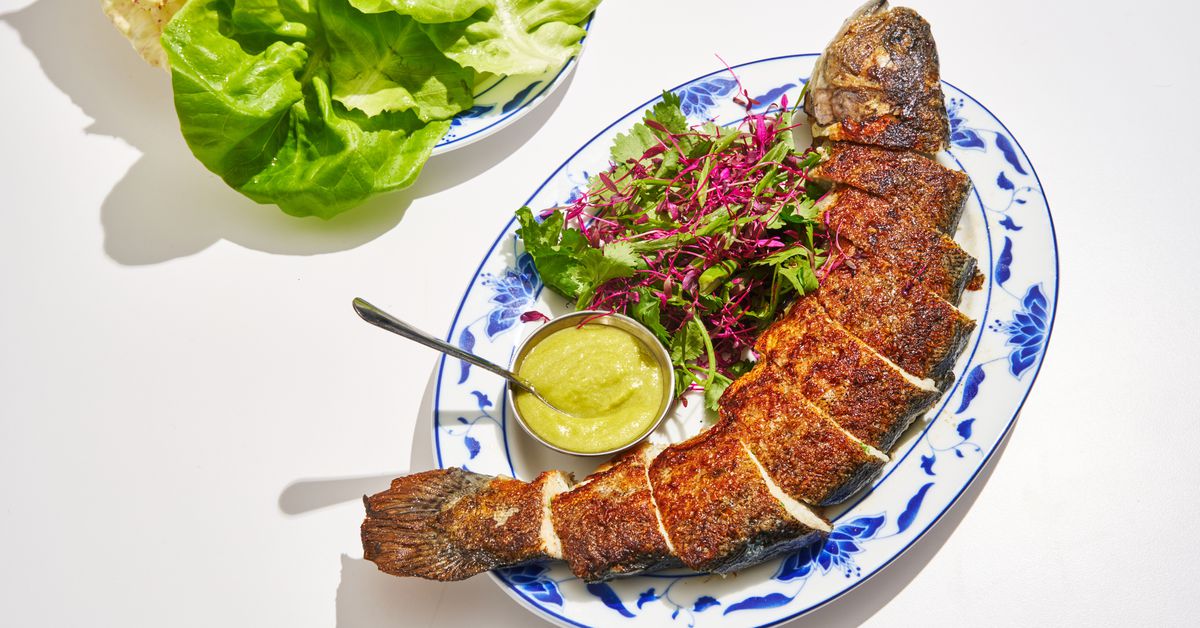 Calvin Eng, the former head of Win Son behind Bonnie’s, named his next Cantonese-American restaurant after his mother’s name, but it wasn’t until months later that he broke the news. He was sitting across from Bonnie at dinner when he said it, and the first thing she did was laugh, thinking it was a joke. “She was happy, but she expressed it the way an immigrant mother would put it,” he says, meaning the word “proud” was probably not used, but she shared articles with her friends and family whenever the restaurant’s name – her name – appeared in the news.

And while a Chinese immigrant mother’s praise is often communicated with deeds, not words, fans of her restaurant have spoken a lot. They’ve followed the Borough Manager to the Borough on pop-ups over the past year and lined up at Bonnie’s for canned fish and oysters before the gas was turned on. This week, the Cantonese-American restaurant will finally open its doors, welcoming patrons inside at 398 Manhattan Avenue, Frost Street, Williamsburg on Friday, December 3.

Some New Yorkers have eaten at Bonnie’s before, or at least something like that. Over the past six months, the Cantonese-American chef has tested most of the recipes on his menu – a bowl of rice noodles here, a slice of egg custard French toast there – in pop-ups across. Manhattan and Brooklyn. The restaurant’s cha siu-glazed pork, served on a McRib-style sesame milk bun ($ 25), debuted at Win Son in April; its shrimp and pork wontons ($ 16) have been floating in their Parmesan broth since March.

These dishes, and more than a dozen more, will now be served at this 40-seat corner restaurant, much of the decoration of which was purchased in Manhattan’s Chinatown. â€œI think it’s really special when you can eat something and remember a memory that you had recently or years ago,â€ he says. For Eng, the memories go back further. Aside from this McRib, the chef has been introduced to many dishes served here at his home kitchen in Bay Ridge, or at dinners with his family in Chinatown.

There’s the savory custard known as jing sui dan ($ 16), whose water-to-egg ratio Bonnie would measure using eggshells and intuition; and a giant shrimp order ($ 16) inspired by the platters of shrimp and nuts the chef was known to inhale as a kid at Chinese banquets. At Bonnie’s, the plump shellfish is mixed with a combination of Kewpie mayonnaise, condensed milk, honey and rice vinegar.

The most expensive item on the menu, a rainbow trout ($ 49), is also one of the more complex. The whole fish is boned, then stuffed with the same mixture of shrimp, fish meat and water chestnuts that adorns its wontons. That’s what the 27-year-old chef would do with his mom and aunt when they wanted to spend an entire day together, given the time it takes to gut, mash and stuff a whole fish.

Here, a team of rowdy chefs and bartenders, some of whom previously worked at Win Son, replace the family. Brad Holtzman, Eng’s friend and former owner of Taquitoria on the Lower East Side, has become general manager; Channing Centeno, a former Taiwanese-American restaurant bartender who also served lumpia to protesters during the pandemic, maintains the bar.

â€œThe Chinese – and Cantonese in particular – when we go to big dinners and parties, there’s always brandy,â€ says Eng, and this corner restaurant with a backyard intends to channel some of that same energy. Tsingtao beer comes in just one size – 22 ounces – and five varieties of brandy will flow in one to two ounce streams. The espresso martini, hated by some bartenders, is adopted here and served in the style of yuenyeung, a tea and coffee drink popular in Hong Kong.

The words “Cantonese American” are written on the storefront of Eng Restaurant, a phrase that not only embodies his identity – as an equal lover of Crunchwrap Supremes and Chinese long beans – but also his professional experience in New York kitchens. . The chef made his debut at Nom Wah Tea Parlor, a century-old dim sum restaurant located on Doyers Street. It was there, as he worked with clients and colleagues in Chinatown, that he realized he wanted to engage more deeply in his heritage and, eventually, open his own restaurant.

In 2018, he landed at Win Son in Williamsburg, where owners Josh Ku and Trigg Brown undertook a similar effort with Taiwanese-American dishes. (Brown, who briefly walked away from the restaurant last year amid hostile work environment allegations, is an investor in Bonnie’s.) Eng worked as a chef in his kitchen until February of this year, date he left to concentrate full time on opening his first restaurant.

In particular, the chef has never been professionally trained in Chinese cuisine. â€œAll the underlying ideas are Cantonese, but there will be a lot of Western influence, technique and ingredients,â€ he says. He might know how to use a skillet better than a wok, but this Cantonese-American mom boy says he “knows[s] how to flavor food.

Early next year, the chef will unveil a brunch menu featuring French toast with duck egg cream and other dishes reminiscent of Hong Kong diners known as cha chaan tengs. For now, Bonnie’s is open Tuesday through Sunday, 5 pm to 10:30 pm. Closed Mondays.

American restaurant chains are targeting the UK for growth. Here’s why.