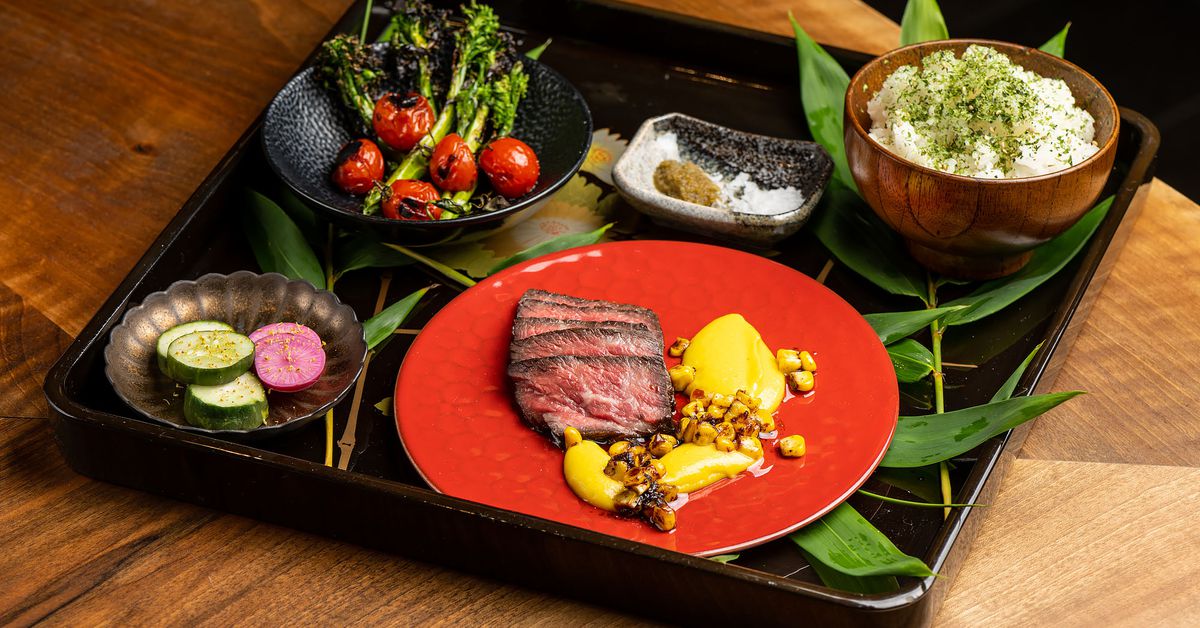 What is Japanese American cuisine?

Answering that question is at the heart of chef Chris Ono’s culinary residency, Hansei, at the Japanese American Cultural & Community Center (JACCC) in Little Tokyo, which kicks off this Thursday, August 11 and will run through next spring. After cutting his teeth in some of the world’s most prestigious kitchens, Ono’s next chapter promises to be his most ambitious endeavor yet. Course by course, the chef’s tasting menu takes diners on an inspirational culinary journey from the perspective of a fourth-generation Japanese-American, born in Los Angeles and trained in fine dining. By exploring, defining and sharing what Ono calls “THE Nikkei” kitchen, the chef wants diners to reinvent Japanese American cuisine beyond staples like teriyaki and California rolls.

“My goal is to take what’s on my mind and in my heart, use techniques I’ve learned from all these amazing places and chefs, and tell my version of Japanese American cuisine,” says- he. “I think it’s a good time to reinvent the wheel – stay true to the flavor, the familiarity of it, but at the same time bring some technique.” Ono cites Night + Market’s Kris Yenbamroong and Anajak Thai’s Justin Pichetrungsi, two Asian American chefs who have successfully revitalized their family’s decades-old Los Angeles restaurants, as inspirations. “It’s an amazing time in food right now because people are really taking their own personality and their own voice and trying to live with it,” he says.

Hansei, which means “reflection” in Japanese, has been a part of Ono’s life for as long as he can remember. As a young cook trained in rigorous kitchens including Eleven Madison Park in New York, Providence and Mori Sushi in Los Angeles, and RyuGin in Tokyo, Ono cataloged his mistakes in a notebook. As he wrote down each misstep, he hoped to never make the same mistake twice and grow from each experience. “The idea of ​​hansei really stuck with me, to make those mistakes and embody them,” he says. “I think some people tend to hide them or put them away.” The lessons Ono learned through this practice influence every element of the chef’s residence – from its eight-course menu to its historic setting in Little Tokyo and even the kitchen’s respectful culture. Along with Hansei, Ono lays out his past and present for all to experience; food doesn’t get more personal than this.

For the multi-course menu, which is priced at $175 per person (excluding taxes, fees and tip), Ono marries Japanese respect for seasonality with inspiration from his upbringing and formal training. Growing up in West LA, Ono’s mom made cornflake-crusted chicken wings and served them with a simple coleslaw topped with dried ramen noodles. The chef pays tribute to this adored dish with a cornflake-crusted foie gras candy, a marvel in one bite that awakens the palate at the start of a meal.

Hansei’s menu will change over time as Ono refines dishes and experiments with new ideas. “I come from a lot of chefs who, for better or for worse, are just never happy with what they serve. But I think that’s what drives us and pushes me to understand these things,” To accompany Ono’s cuisine, craft cocktails, local beers, Japanese sake and Californian wines produced by Japanese-American winemakers.

The three-part Hansei Experience takes diners to the new Toshizo Watanabe Culinary and Culture Center, tucked away on JACCC’s 2.2-acre campus, beginning with appetizers served in the James Irvine Japanese Garden, main courses more plentiful at the chef’s counter and desserts in the lounge. Ono looks forward to connecting with diners seated along the L-shaped counter by sharing the stories and reflecting behind each dish.

Jane Matsumoto, Culinary Arts Officer at JACCC, brought Ono on for the inaugural Chef-in-Residence program while cooking locally in Yojimbo. “Chris gave us the opportunity to work with someone who was both Japanese-American, fourth-generation, Japanese-educated, American-educated, worked in some of the hottest restaurants,” she says. “We thought it could amplify the voice of Japanese American cuisine and elevate it to different styles that are a little different from just Japanese washoku food.” She hopes Hansei will bring “younger generations” and a “wider audience” to the JACCC.

After years of working behind hot stoves in dimly lit, windowless kitchens, Ono was surprised the first time he visited the culinary center. Overlooking a pristine Japanese garden – quite possibly the lushest pocket in downtown Los Angeles – the chef saw the awesome potential of cooking in a community-oriented environment, rather than a commercial one. “I thought it could be a world-class upscale dining experience where people could walk in, spread out, and just take a little trip,” he says. Ono, who admits to getting exhausted working in high-pressure restaurants that constantly demand perfection, can breathe a little easier here too. “I feel more connected to this place than to an independent restaurant,” he says. “A lot of times I do restaurant food, I have a lot of questions and hesitations. There hasn’t been a moment where I hesitated or really questioned what I put on the plate. Coming here was always like coming home.

Hansei is open for dinner Wednesday through Friday. One must reserve.