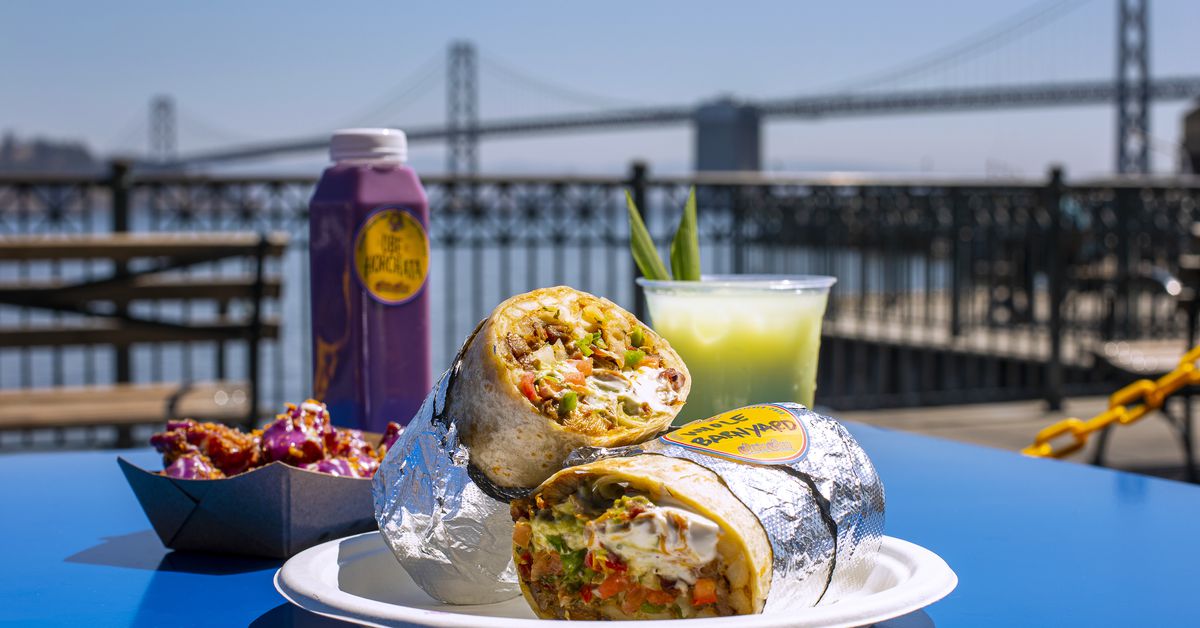 Downtown workers looking to spice up their lunch routines and tourists looking for something uniquely Bay Area will have a new dining option at the city’s famous Ferry Building starting next week when the Filipino-American food truck Señor Sisig will open its latest location. Taking over the former Brown Sugar Kitchen space, the third permanent restaurant Señor Sisig sticks to the bold favorites that have made the company a resounding success over the past decade – but co-founders Evan Kidera and Gil Payumo have also new tricks up their sleeves.

The location’s new menu features many of the restaurant’s vegan options and, through some collaborations with other Ferry Building tenants, also debuts a handful of new items, including a sisig torta and egg-sized churros. a bite painted with violet sauce ube-macapuno. Being able to put down roots under the iconic clock tower among the ranks of other beloved local vendors marks a milestone for owners. “It’s exciting to be a part of it,” says Kidera. “For me to have this happening now is humbling, but also exciting.”

Of course, the heart of the menu remains the same: Señor Sisig’s modern take on the Filipino staple, sisig. Payumo, the driving force behind the menu, says Señor Sisig’s version of the Kapampangan cuisine classic replaces the leaner pork shoulder with the usual mixture of pork face and belly, but still requires long hours of marinating. before being finished on a grill to achieve the ideal crispy texture. Diners can get the “San Francisco-style sisig,” as Kidera says he once saw it called on a menu in Manila, stuffed into burritos, scooped into tacos, piled on top of nachos or fries, and simply plated with a side of rice.

But longtime Señor Sisig stans will also have new options to explore. For one, the co-founders are proud to bring plant-based protein to the newest location. Customers will have the option to order any menu item with vegan ‘chicken’, which the company sources from Oakland’s Layonna Vegetarian. They’re also teaming up with Acme Bread, who make perfect sour baguettes and impeccable apple turnovers just around the corner in the Ferry Building, to bring a pork torta to the menu. As you’d expect from the daring culinary minds of Señor Sisig, it’s a jam-packed affair made up of beans, guacamole, pickled onions, etc., then grilled for a nice crunch from the first bite.

To wrap up the meal, grab a serving of the new ube-macapuno churros, which are cut into bite-size pieces, perfect for snacking on as you stroll through the food hall or around the Saturday market. Payumo says they teamed up with Acme on the churro batter, so, naturally, he achieves the ideal airy, almost creamy interior with a golden shell coated in sugar and cinnamon. Within the first month of opening, the restaurant will also offer the hugely popular Humphry Slocombe ice cream collaboration dubbed “churron”, a delicately sweetened banana ice cream skewered with cinnamon caramel and smashed with chunks of churros.

Ultimately, there are even more delicious things to come. The co-founders and best friends (Kidera and Payumo met long ago in high school before coming together to launch Señor Sisig’s first food truck) are looking forward to reigniting their partnership with empanada king Joseph Ahearne from El Porteño, whom they’ve known since the early days of Señor Sisig. They hope to bring back a pork and pineapple filled empanada they first worked on a decade ago. They are also in the process of firming up the liquor license licenses of the Ferry Building locations, after which they will launch the first Señor Sisig cocktails. Keep an eye out for options like an alcohol-enhanced version of their horchata ube and the Señorita, a margarita that sailed through the Southeast Asian archipelago where it picked up ingredients like Datu Puti vinegar, Nixta Licor from Elote and tamarind.

The roughly 600 square foot space may seem cramped for some operators – and to be fair, it is – but for a team used to weaving through food truck footprints, the counter service point will be more than enough. . Plus, there’s a surprising amount of seating for customers; in addition to that 30-seat rear patio overlooking the bay and the elegant deck that spans its full length, they plan to drop a handful of high tops in front of the counter to provide an additional 20 seats. For now, they will be serving lunch and dinner 7 days a week, opening earlier on Saturday and Sunday for anyone who wants to silo (as in, throw in a fried egg) a plate of rice and sisig to start the daytime. For the two founders, being able to serve Señor Sisig’s Filipino-American street food as part of the Ferry Building community is reminiscent of the days when they set up shop at food truck events like Off the Grid – long before little did they know they would become a beloved Bay Area destination for guilty pleasures like Sisig Crunchwrap. “It sort of comes full circle,” says Kidera.

Does American cuisine deserve culinary respect? The author will participate in the Milford Readers & Writers Fest