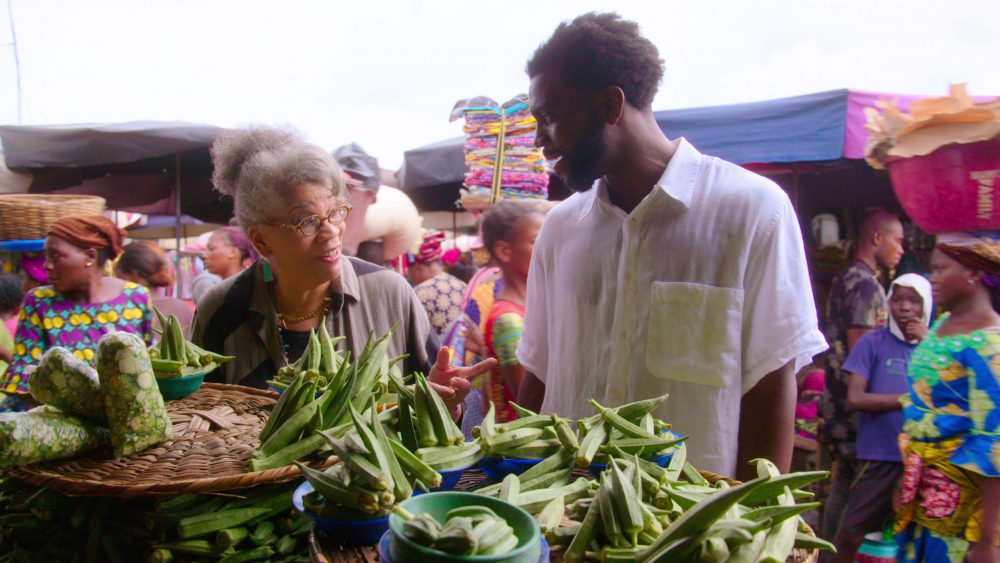 Netflix’s new “High on the Hog” isn’t just a cooking show, story show, or travel show. It’s a joyful combination of all of these genres, imbued with a deep respect for the people and places that helped create African American cuisine, which in turn has become simply American food.

Based on the seminal book of the same name by food historian Jessica B. Harris, the four-part series travels to Benin, West Africa, as well as the United States, South Carolina in Texas, via Philadelphia and New York. In doing so, the show reveals stories behind African American table food and its relationship to black history.

From a moving moment at a memorial site reminiscent of the slave trade in Ouidah, Benin, to a gourmet tour of the desserts and traditions of Juneteenth, it’s an expansive and lush view photographed of painful and festive moments in history. , accompanied by the traditional sounds of the Geechee Gullah Ring Shuters of South Carolina.

“It’s our agricultural knowledge tied to our culinary knowledge, with that historical and cultural background, which in my opinion just hasn’t been seen and presented as part of a cohesive story. So far, ”Satterfield said Variety.

Here, Satterfield, Toback and Jagger chat with Variety on how they approached the production of the groundbreaking series.

How did you decide to base the series around the book “High on the Hog”?

Fabienne Toback: Writer Jeff Gordinier sent me the book. It was this beautiful connection to our love of food, and it made perfect sense. When I read “High on the Hog” there was so much information that I had no idea. And as a black American, I was like, “If I don’t know about this, how many other people don’t know about this story?”

Stephen, what was it like hosting a show for the first time?

Stephen Satterfield: I remember Fabienne reaching out to me and asking me if I was familiar with Dr Jessica B. Harris’s book. Not only did I know it, but it had such a profound impact on my life. I was so supportive that my mind was not in a space I was hosting – I was just like, “I want the show to happen.” So it took a few conversations before I realized what was required.

Karis Jagger: Stephen kept thinking that we wanted his help, but we were like, “No, we want more than your help, we want you. “

You shot the first episode in Benin with Dr Harris – how was the filming there?

Satterfield: I have been described in the New York Times as “wonderfully green”. I think this is somewhat true. I made a huge amount of media. But almost everything was with me on the other side of the camera. I didn’t know what to expect. I was just in awe of the whole experience. It will always be a surreal experience. It was reinforced by the fact that I was there with someone who was one of my intellectual and literary heroes.

How did you approach the filming of the culinary scenes? It’s more than a cooking show.

To return to: When Karis and I were developing this series, we really didn’t want it to be a cooking show. It’s not a step-by-step guide, but the food is an integral part of telling the story. So it worked out.

Jagger: Jerry Henry is an amazing DP and did a phenomenal job. Lots of those places – it was hot and he was spending that time making sure we got all of these great photos.

What has been the most memorable dining experience in Africa?

Jagger: There was this hot sauce that was cracking! And there was another scene where the food was prepared by these women in the local villages nearby. These were old recipes that were pre-colonial. It was really interesting with funky flavors that I had never had before.

Satterfield: I’m going to layer on the hot sauce because it was so elusive. I tried to reproduce this hot sauce with all kinds of peppers. And I can’t figure it out. I am convinced that this must be the land of the peppers that grow there because I cannot achieve the same nuances, flavors and spice profile.

It was in every restaurant we went to, and we were asking questions about it. And they would say, “What are you talking about? No one knew the recipe, but it was so much a part of their life that I don’t even think they noticed they had the most special hot sauce in the world.

The second episode focuses on South Carolina, the Sea Islands and the Gullah Geechee community – why are they so important in the history of African American cuisine?

Satterfield: I think one of the biggest lessons from this episode is really about the fundamental relationship between the African American people and the United States. This story emerges in the history of rice. When we look at how the wealth of the nation was built up, [we’re pushing] against the dominant narrative that black people are enslaved because of our bodies, our physical beings, and forced into labor. The truth is, it was actually our minds that were the forerunners of the nation’s wealth, for rice is such a difficult crop to grow. So part of what has been lost in this story is just a complete marginalization of the importance of the rice trade in establishing the wealth of the country, but also of how the African American people , the enslaved Africans, who made this wealth grow not with our body, but mainly with our knowledge.

How did you decide to integrate the Geechee Gullah Ring Shouters into each episode?

To return to: The second episode was filmed first and the Ring Shouters were in it. And then we realized that every episode had to have this musical piece in addition to the chamber orchestra, church music, University of Texas band. Each episode had to have these rhythms. Music is such an important part of African American history. There was no music from those pre-colonial times that you could access, so bringing in modern versions of it became very important.

What was it like working on a project with a mostly black creative team?

Satterfield: This is the part of the production that made me say yes right away. Much of the power of this project lies in the content, but also, who had the agency to make the show. I think what you are seeing – sharing these stories with us from our communities – is a level of care and sensitivity that I think would not have been possible without allowing those of us with the lived experience to ” be the arbiter and interpreter of these stories, to project and reflect in the world. I don’t think this is something that will be lost on black viewers, whether in the United States or elsewhere in the world.

To return to: We were very lucky to partner with Roger. He really understood it. With “Life Animated” he brought such a nuanced sensibility to tell this story. We didn’t want it to be just food, but also to bring that sensitivity, to show resilience and artistry. He had enough weight and insight to help us do this.

There’s a lot of cinematic art in there that Roger brought to the table, in terms of leaving room for thinking, where it’s not always about speaking. In this wonderful scene where Stephen is standing on the field, it’s like something is going to happen, some kind of nugget is going to fall. And we give you a break to understand. It’s Roger.

Until recently, many food and travel shows featured many white men traveling around the world. Do you think the dynamics are finally starting to change?

Satterfield: Hope I am part of the changing dynamic. We’ll see. I have dedicated my life to food for a very long time. I am so ecstatic for a generation of young black children who will have the opportunity to see their likeness on the screen reflected on them, and to see their story receive the same care and attention as every other story we have. teaches us. to be valued and often prioritized. Especially in the world of culinary arts, we see a hierarchy with European cuisine at the top and French cuisine at the top of that hierarchy. So I’m happy to jump in early and hope there are others who are right behind me.

What do you hope audiences will take away from the series?

Jagger: I hope people see the contributions African Americans and Blacks have had on American cuisine. Even something as simple as mac and cheese, which is something so familiar, is now being reconsidered. Black cuisine is not monolithic. The more we see our contribution, the less compartmentalized it is, “black food is bad. “

To return to: There is a very high level of activism when it comes to telling our story. When we were looking for people to populate the show, we were very intentional.

Jagger: There is also a very beautiful thing about passing the torch and I think that was part of the beauty of having Stephen. There was a passing of the torch from Jessica to Stephen and you see it with BJ Dennis and the Greens, and in every episode there is a feeling that the next generation has to pass the story on to the next generation. So Stephen will pass the torch, hopefully to my son, and so on.

“High on the Hog” is now streaming on Netflix.