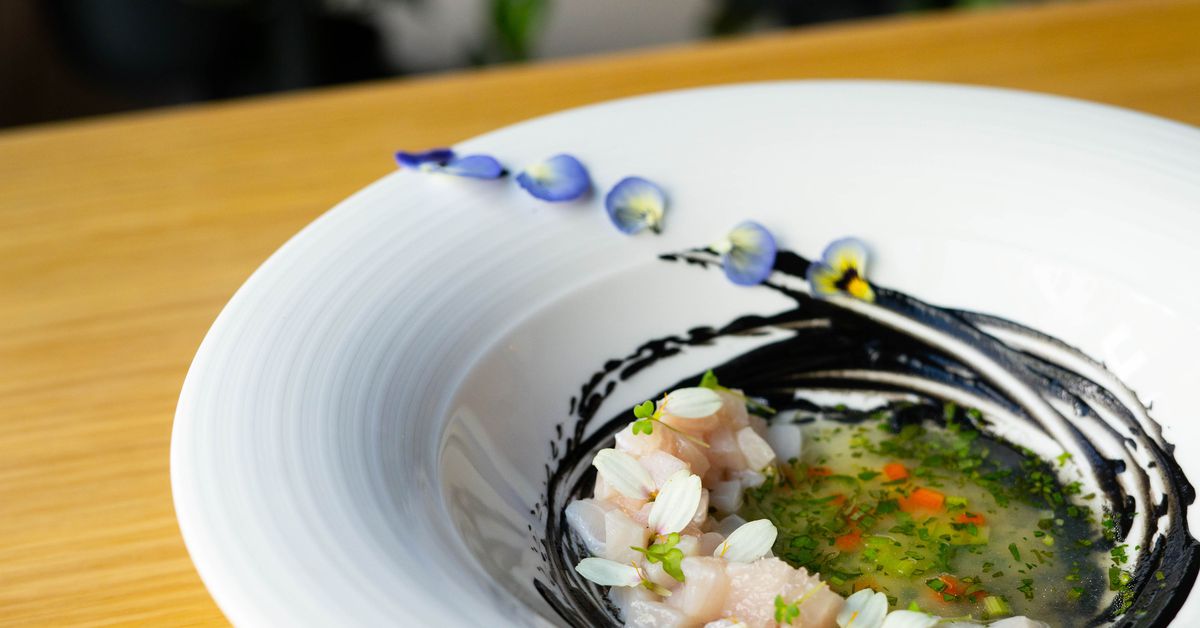 Located at Camperdown Plaza in downtown Greenville – a space that could very well be the new center of downtown, according to Executive Chef Drew Erickson – the camp recently opened with one mission: to deliver an experience that encompasses the culinary scene. already established in the city while providing an experience that will help this same scene to develop in the future.

The newest restaurant in Greenville’s Table 301 restaurant group, Camp is the brainchild of Erickson and Table 301 founder Carl Sobocinski. Erickson, originally from Greenville, started working for Table 301 right out of high school. After working at Soby’s, Erickson went on to help open Passerelle Bistro as a sous-chef before leaving the area to stage at Thomas Keller’s famous Napa Valley restaurant, the French Laundry. A two-week visit turned into a month, which turned into four years for Erickson, where he eventually rose to the position of Saucier.

â€œAfter four years I was ready to go home – the plan was still to come back and work on a project with Carl,â€ Erickson said. “Then the shutdown happened and it seemed like almost perfect timing as I was already leaving.”

During 2020, Erickson said they continue to plan. When things started to get a little better, a little brighter, they decided to pull the trigger. Being able to design every component of the restaurant from scratch, they were able to really make it their own – and truly a place that could become a neighborhood place. The design of the restaurant speaks of it. Overall, a mix of nature-inspired browns and greens creates a relaxing environment for casual and cozy dining – including an eight-tray table in the center of the dining room with a lazy susan – while the bar indoor / outdoor (where they work on take-out cocktails) and the rooftop space encourage good times around light snacks and cocktails.

The menus were also designed to fit a neighborhood location in the upstate. For Erickson and his team, that meant creating something that would appeal to the diverse patrons of the burgeoning food town of Greenville.

â€œSince Greenville has become known as a food town, people are ready to try new things and be more adventurous. With my training and with my team, we can take new things and make them accessible, â€said Erickson. â€œThe menu we started with, as well as our menus going forward, will be diverse but very affordable. We want to have a bit of everything for everyone.

To figure out what exactly would appear on the opening menu, Erickson worked with his team for about seven months, hosting 10 tasting menu dinners of 10 courses each. From there, they used the comments to refine the final dishes.

What they have chosen is a menu that reflects the idea of â€‹â€‹variety. Not only do each of the sous chefs have a say in what is on the menu, allowing each to present their own specialties from time to time, Erickson said, but the menu was and will continue to be dictated by the seasonality. Erickson added that the goal is to change the menu every month, if not every two weeks.

“Instead of putting ourselves in a corner and saying that we are just this or that, we wanted to focus on the concept that there is no concept.”

The opening menu highlights it through dishes ranging from a corndog wagyu with truffle aioli to a slice of “black spore” mushrooms with roasted garlic, a sherry cream sauce, thyme. and a hot ciabatta with chilled ceviche with market fish, leche de tigre, charred habanero, sea beans, nori and lime.

The variety doesn’t end with the food, however. The cocktail menu, developed by Table 301 beverage director Joe Crossan, features drinks such as What’s The Story, Morning Glory (Hendricks infused with butterfly peas, lemon, blackberry, lavender, orgeat and mint) and glasses roses (pisco Barsol, lime, lemon, strawberry, rose and aquafaba), as well as a variety of mixed non-alcoholic drinks to choose from.

Having the ability to change the menu often and not be framed in my descriptors, said Erickson, if nothing else helps those involved always have a good time and not get bored. The hope is also that without bonding to a particular type of cuisine, Erickson and his staff can grow as the Greenville dining scene grows, solidifying their space not only in the Table 301 family but in the scene in his. together. Opening up when they’ve done it, just like life returns to a semblance of normalcy, gives Erickson hope that they’ll be able to do just that.

A European touch near you with Spanish, Italian and American recipes