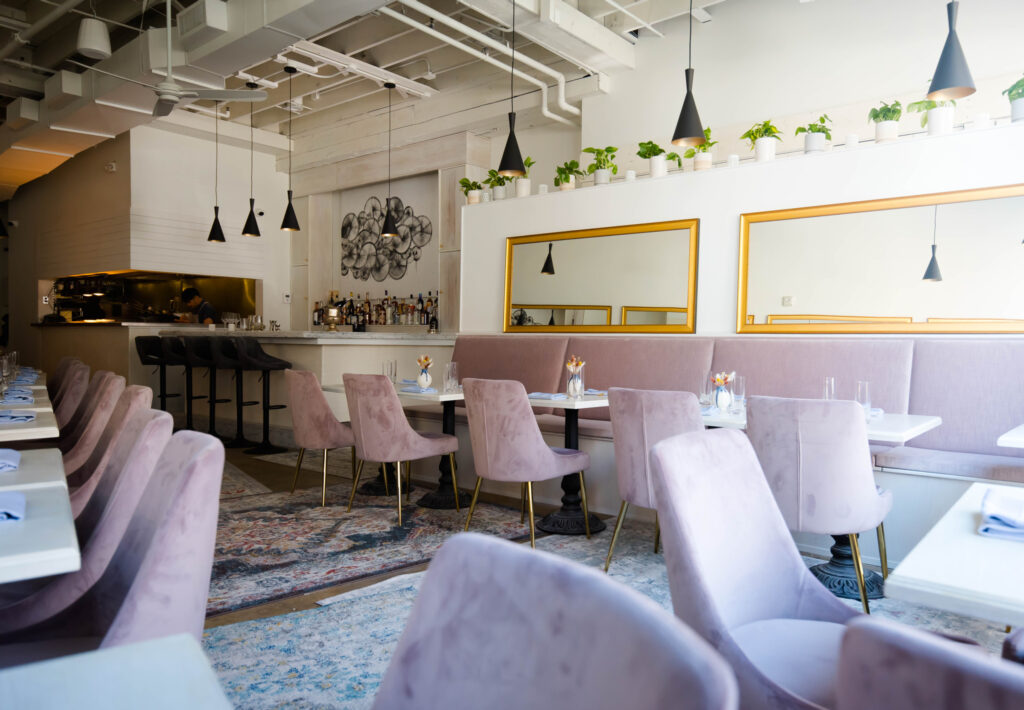 Excerpt from a press release:

“On March 8, Chef Andrew Markert will open the doors to Newland located at 327 7th Street SE for its soft opening. Named after the street in the Guilford neighborhood of Baltimore where Markert grew up, Newland is his most ambitious project to date and represents the culmination of his culinary journey thus far. The restaurant tells Markert’s story through technical dishes with touches of nostalgia that showcase the fine cuisine that is central to the current moment in his career. He joins Beuchert’s Saloon, his nearly nine-year-old Capitol Hill restaurant around the corner, and the next brick-and-mortar space nearby for Fight Club, his pandemic-era sandwich pop-up, in its growing portfolio of Capitol Hill restaurants.

“Newland is the conversion of where I’ve been and where I’m going. I decided to pay homage to the people and places that have been my biggest influences, but in a style all my own. The menu tells the story of pivotal moments in my journey as a chef and how those experiences led to a new, higher style of cooking,” says Markert. “It picks up on and expands on things I’ve done over the past two years at Beuchert, and I’m excited to give this food its own home and continue to grow with it.”

Drawing inspiration from his childhood, the many cuisines that shaped him as a chef, and friends in the industry who were also his most important teachers, Markert’s menu is designed to be a nostalgic yet refined experience. . Newland offers two tasting menu experiences: a four-course prix-fixe menu for $80 and a chef’s tasting menu ($120) featuring six courses of menu and off-menu items plus ongoing “snacks and surprises.” of road. Charred scallops are served with charcoal oil, persimmon, pine berries, crispy rice and a crab fat powder that mimics the vinegar and oily flavors of steamed crab feasts, a beloved tradition in Maryland; The Crispy Pata with crispy rice crusts, kumquat stew and pepper juice is influenced by the accompaniment of a close friend on his return trip to the Philippines; and a riff on Lemon Pie consisting of a white chocolate sponge, kumquat, meyer curd and crumble is Markert’s ode to his mother’s homemade lemon meringue pie.

Extras to both menus include caviar service with 1 ounce of Osetra or Hackleback caviar accompanied by sour cream and chive fritters, dried egg yolk and vanilla curd and Torchon à la Crêpe with fermented blueberries, marigold , gold and yogurt. In addition to the two tasting menu options, guests can expect a more elaborate experience offered at the Chef’s Counter when it opens in the coming months.

Mackenzie Conway, longtime director of beverages at Beuchert’s Saloon, will oversee a wine-focused beverage program that showcases classic styles of wine from lesser-known producers and producing regions. He’s curated a selection of wines that hit all the notes customers are looking for on a wine list, but come from places that are usually not well known for their winemaking or from vineyards they may not recognize. Along with this, Conway highlights “dead” wines, the last of the inventory of wineries that no longer exist as well as wines from producers who have been overshadowed or neglected in recent years. Given this, Conway acknowledges that the wine list can seem daunting at first, which is why all wines will also be available in half-pours, allowing customers to sample new varieties before committing to a glass. or a full bottle.

“For me, the wine list boils down to the saying “a rose by another name”. All of our wines have elements of something you already know, we’re just presenting them to you in a new way,” says Conway. “Because so many of our offerings might be unknown to customers, I intentionally set out to make the wine list as accessible as possible. We will be happy to offer you tastings of all our wines and they are also all available in half pour. I’ll open just about any bottle as long as a guest can commit to drinking some, so we can open the door for them trying something new.”

Conway’s cocktail list follows the same theme: “obscure classics” that have been around for a long time, but with which customers may be less familiar. Each featured cocktail is drawn from one of the five main techniques used to make any drink: shaken, stirred, highball, egg white, and “tossed” or “tossed” cocktail. His creations include mastiha-based Stone’s Throw (what Conway called “the OG anise liqueur” before sambuca eclipsed it in popularity), barolo chinato, and 6-year-old rye sazerac; the Ulfbert with meyer lemon, tahini kefir, chamomile, egg white and aquavit, a drink with a very Levantine aromatic profile, but made with a Scandinavian spirit; and the Bodhi with ferro chino, maraschino and the Compass Box Glasgow blend. A rotating “spiritual optional” cocktail will be available with The Smith Street made with pineapple, dill bush, honey syrup and lime as the opening offering.

Echoing Markert’s gourmet menu, the drinks program nods to Conway’s childhood with his Bolivian and Bulgarian heritage represented in the cocktail and wine lists respectively. He plans to use the culinary program as inspiration with current ingredients and flavors from the kitchen appearing in future cocktails.

The Newland team transformed the former Montmartre space using a clean design with touches of elegance. The dining room, which seats 42 guests, is unified with whites, pinks and soft blues with natural elements, including joinery using light woods. At the center of the restaurant is a marble bar that seats five, set beneath a black and white painting by local artist Emon Surakitkoson, created to be a focal point while blending into the space. The lighting is the most important element in order to feel polished and caring, while remaining warm and inviting, echoing the ethos of the culinary program.

Newland pulls the thread of nostalgia and childhood memories with playful touches throughout the restaurant and service, including Markert’s childhood photos lining the entrance, serving caviar presented in lunch boxes of old school and gold-backed children’s books as check presenters.