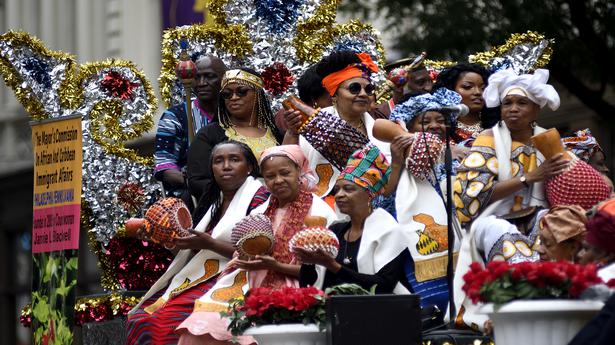 Years before tasting okra for the first time, I had encountered the world of black American, Creole and Cajun cuisine in the pages of James Lee Burke’s detective novels. The image of dirty rice with gravy, with refried red beans and pork chops on the side, not only fueled my imagination, but also opened up a whole new world of African American food.

ALSO READ: The Hindu explains | What is Juneteenth?

Today is a good day to toast this kitchen. It’s Juneteenth, a day that celebrates the end of slavery in the United States with picnics, barbecues and feasts.

It was on June 19, 1865—more than two years after U.S. President Abraham Lincoln signed the Emancipation Proclamation—that Union Army Major General Gordon Granger arrived in Galveston, Texas, to finally let the slaves of the state know that they were free. And a year later, black Americans in Texas marked the day with joyful music, dancing and food.


And what food! Many of them appear – in great detail – in a new book, Watermelon and Red Birds: A Cookbook for June 16 and Black Holiday Celebrations. But the book, writes author Nicole A. Taylor, is not an attempt to “capture the tastes and recipes” of the 1866 celebration. It’s a testament, she says, to where black people stand today. Americans.

“Red is a party essential – bursting with red soda, red beans and rice, and fruits like watermelon”

“It’s more than classic American comfort food like corn dogs, turkey thighs, elephant ears and Frito pies that keeps black Americans connected to traditions like fairs and festivals, and to places like Texas… We merge in the backyards, merging the places we know and the varied cultures around us, and blending American traditions. Taylor’s book contains 75 recipes for drinks, appetizers and side dishes for Juneteenth. It includes, as it should, the traditional red drink – hibiscus tea – found at many festive gatherings.

Red is a party staple – bursting with red soda, red beans and rice, and fruits like watermelon. I came across an article in Oprah Daily quoting food writer and historian Michael Twitty saying that red was important because people’s common foods were once largely white, green or brown: “there was an excitement that came with the rarity of eating colored treats red”.

Taylor declares any bright, vibrant drink “A-OK for Juneteenth.” But don’t forget, she adds, to “thank the descendants of enslaved Africans for keeping this ritual alive.”

The spirit of black barbecue


People with food memories also feed the June 19 ritual. Taylor recalls how 61-year-old Marguerite Hannah’s voice “lit up” when she talked about the June 19 food she had eaten as a child in Galveston: beef brisket, hot links, stuffed shrimp, potato salad and lemon pie. And how Texan Annette Gordon-Reed set off Taylor’s “drool alarm” when she described her grandmother making hot tamales on June 19: “‘Soften the corn husks in hot water, grind the pork, beef or chicken, prepare the masa dough to be spread on the wraps, fill the dough with the seasoned meats and bind the tamales for the final preparation…’”

Memories aren’t just celebrations, though. Taylor walks us through the history of fairs, pointing out that the word “fair” sounds like fun but “like many words in the American lexicon, it’s steeped in racial and racist history.”

The Texas State Fair, for example, was not desegregated until the 1960s. Three years after it was first held in 1886, it added a “Colored Day” – which meant they were prohibited on the other days of the fair. This day too was discontinued in the early 1900s.

Decades later, in 2011, Taylor attended her first Juneteenth festival in Brooklyn: it reminded her of a “little Texas Juneteenth fair.” In 2012, she hosted a Juneteenth picnic, complete with oven-roasted pork shoulder, potato salad, pickled vegetables, cornbread, and strawberry crisp. “Food was good; society was better; the spirit of black barbecue continued,” she wrote.

In addition to stories and culinary recipes, Taylor gives rich advice to the reader. “Gather your tribe whenever you can. Feed them well. In effect.

Rahul Verma enjoys reading and writing about food as much as cooking and eating it. Well, almost.

A massive Cuban, Mexican and Latin American food festival is coming to Manchester in July!