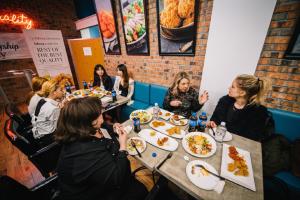 Mashed, a food magazine from “Static Media”, a content company dealing with various topics such as food, lifestyle and culture, is a media outlet with over 20 million monthly subscribers and over 1 million subscribers to the SNS channel.

The barbecue uses golden olive oil for health. In addition to fried chicken, it also sells a variety of chicken such as honey garlic, golden olive, and soy garlic in the US market.

BBQ strategically operates stores adapted to the characteristics of each region by relying on the franchise system and know-how in place for 27 years. New York’s Manhattan store, which introduced the Grab&Go no-bake removal system, is successfully operating in step with busy lifestyles.

Recently, BBQ was reported as K-chicken, a favorite of locals, in FOX 35 Orlando, Florida, on FOX News, a famous American broadcaster.

Additionally, in July of last year, BBQ was listed as one of the “5 Fastest Growing Restaurant Brands in America” ​​by Nation’s Restaurant News, a global foodservice magazine.