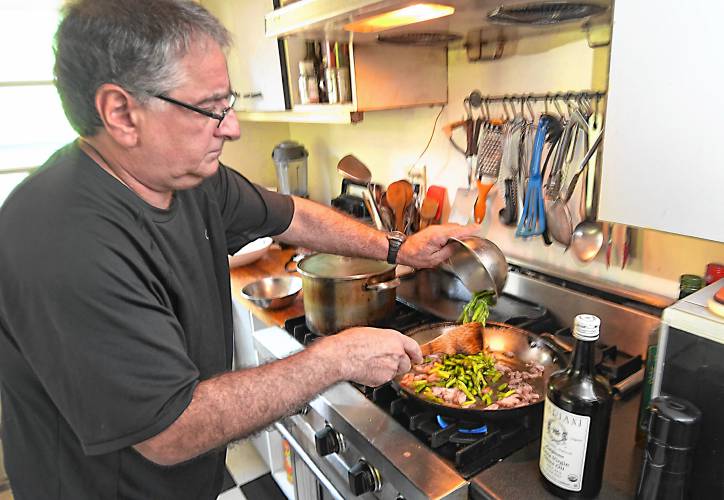 What do fine art, storytelling, cooking, swearing, and a $ 10,000 burger have in common? These are all passions, qualities or experiences of Rob Chirico of Greenfield.

In Chirico’s world, all of the above is water for his mill as a self-proclaimed storyteller and foodie; author of cookbooks, detective novels, non-fiction books on cocktails and swear words; and the one-time winner of a $ 10,000 prize to “Build a Better Burger” in the Sutter Home Build A Better Burger contest. The burger in question is a lamb burger served in pita bread and topped with chutney, which is packed with mint, cilantro, jalapenos, ginger, and other tasty treats.

Spoiler alert! You will not get this recipe today. For that you will have to go to Chirico’s latest cookbook, “Not My Mother’s Kitchen: Rediscovering Italian-American Cuisine Through Stories and Recipes”. The book is a charming and humorous cookbook as a memory of growing up Italian in a house where his now 90-year-old mother hated cooking and believed Italian restaurants were the place where you get Italian food and the house was where you would get TV dinners. . Filled with Italian recipes and a story for each, as well as several of its own illustrations, this book is unlike any other Italian cookbook as the recipes are simple and the history of the recipe or its ingredients helps to inform and improve preparedness. . Likewise, there are plenty of tips and tricks on what to store in your kitchen for Italian cooking and key utensils for preparing any type of meal.

Roxanne: When did you start to cook?

Rob: Food, for better or for worse, has always been a part of my life. I always had an instinct for what could be good, even in my mom’s kitchen. Once when I was about 12, she made a red pasta sauce with canned tomatoes and it was very good. I asked her what she put in it and she thought I was going to laugh at her, but I didn’t. The tomatoes turned out to be Luigi Vitelli San Marzano tomatoes, the best. But it wasn’t until I graduated from graduate school that I started to really get into cooking, and that was Chinese cuisine. Then I started reading Julia Child’s cookbooks and tried to master French cooking. It was during my studies in Italy on a graduate scholarship that I learned what real Italian food looked like. I was addicted. It turns out that the best cuisine is that of the cucina povera, which is the “kitchen of the poor” or the “peasant kitchen”.

RW: Who is your culinary muse?

RC: I guess you could say my mother-in-law made me do it. When I started dating my wife, we would go to her parents’ house on weekends. They always had parties and people were very boring so I would walk around the kitchen to get away from it all. Soon I became one of the cooks for the holidays. But I have probably three dozen Italian cookbooks from the last century that inspire me. It’s interesting how the cuisine has changed over the years. I’m also inspired by what’s available, what’s in season, like the recipe I’m going to make today.

RW: What recipe do you have for us today?

RC: I wanted to make a “Not My Mother’s Kitchen” recipe, so I chose the Roman carbonara spaghetti, and because we are in such a short asparagus season, I add asparagus to what is usually meat. humble, egg and cheese pasta dish.

As I tell in my book, there are many stories about the origins of carbonara spaghetti. It could have been so named because it was an easy meal to prepare for the Italian charcoal makers, hence the carbon; or because of the black pepper spots that are prominent in the dish; or, according to the definition given by Alan Davidson in “The Oxford Companion to Food”, it was invented in 1944 when many Italians ate eggs and bacon supplied by the American occupation troops.

While most Italian-American recipes call for bacon as a meat ingredient, I like to use the more traditional Italian pork, guanciale (pronounced wan chali), which is a dried meat made from the cheek or cheek of the pork. . It is usually processed with ground black pepper or red pepper, thyme, fennel, and garlic. Some people may be put off that the recipe uses raw eggs, but the heat of the cooking means that shouldn’t be a problem, and I only use fresh, locally sourced eggs.

Also, you will see carbonara recipes that contain cream. It’s a categorical no-no. The rich creaminess of the dish comes from using some of the hot water from the pasta mixed with finely grated Parmesan.

RW: Is there anything else special about cooking this meal or any other meal you would like readers to know?

RC: If you don’t have access to guanciale, you can use pancetta. I bought the guanciale on the Internet, but it is often at Provisions in Northampton. In addition, I only use very good pasta. It doesn’t have to be fresh, just a good Italian brand. You will pay a little more, but it will taste better.

Remember to reserve some of the pasta cooking water, as indicated in the recipe. The dish goes well with any type of wine: for red, an amarone or a chianti; for white, an Orvieto or a light Chardonnay. Or, for something a little different, try a Lambrusco with its slight sweetness and sparkle to cut the fat off the carbonara.

Heat a small pan over medium-low heat and add olive oil. Add the guanciale and sauté until just starting to brown (five to six minutes). Stir in the pepper and cook for another minute. Transfer to a large bowl or serving dish and let cool slightly.

Bring four liters of water to a boil. Salt the water, add the pasta and cook until al dente. While the pasta is cooking, add the Parmesan, eggs and salt to the guanciale.

Drain the pasta, reserving ¼ cup of the cooking water. Toss the pasta with the sauce and slowly add the reserved water until the mixture is creamy (you may not need all the water).

Serve allowing your guests to sprinkle more cheese and black pepper to taste. Makes six servings as a starter or four servings as a main course.

In the section “Look who’s cooking!” A monthly column, Roxann interviews and shares recipes from people in Franklin County who may be well known in their professional or political lives, but not in their lives as a cook, baker, or foodie. Send your ideas for Look Who’s Cooking to [email protected]