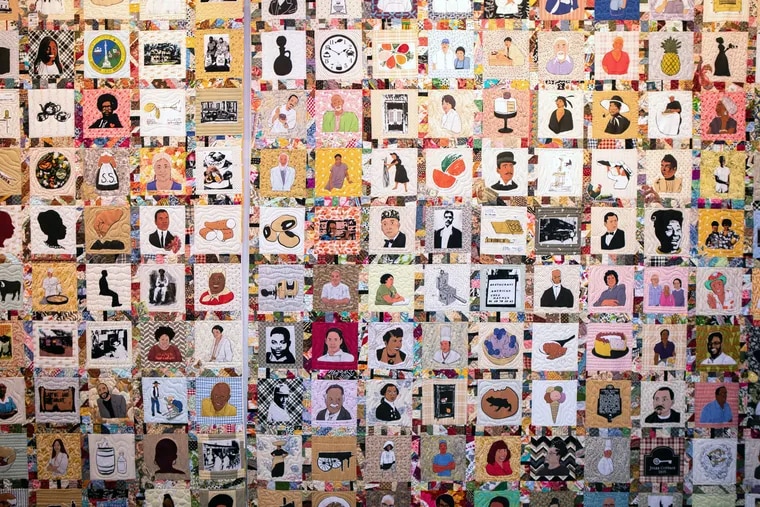 Upon entering the Aliko Dangote Hall of the Africa Center in New York, you are immediately confronted with the breadth and depth of the role that African Americans have played in shaping the food and drink of our country. Measuring nearly 14 feet tall and 30 feet wide, the Legacy Quilt — part of the Museum of Food and Drink’s (MOFAD) latest exhibit — features 406 blocks that illustrate the impact of black people on American cuisine.

“We’re in a few thousand square feet and we’re trying to tell 400 years of history. How do you do that?” Catherine Piccoli, the museum’s curatorial director, said of the exhibit: “Afro-American: laying the table for the nation.” “We discussed early on the concept of a quilt – since quilts are so deeply rooted in African American culture – being part of the exhibit, and as we continued to talk about the quilt, it became the genre place of detention, if you will, to tell as many stories as possible.

Scheduled to run through June 19, aka Juneteenth, the first-of-its-kind exhibit showcases Black culinary contributions in agriculture, the culinary arts, brewing and distilling, and commerce and allows guests to see, to experiment and taste – yes, there is food available – the results. In addition to the quilt, the exhibit includes the Ebony test kitchena bastion of African-American cuisine that was saved from demolition by the nonprofit Landmarks Illinois preservation, along with photographs, artifacts and virtual reality experiences.

Scheduled to open in early 2020, like so many around the world, it has been delayed due to the pandemic. However, given the events of the past two years – including the launch of Netflix High on the porka docuseries based on the book of the same name by Jessica B. Harris that details vital black contributions to American cuisine – Harris says society may be more receptive to such exposure than before.

“I definitely think that living in the post-George Floyd, post-COVID world, posting the whole litany of names that we are now aware of, has made people more aware and more open to hearing how much the founding African Americans have always been in creating not just American cuisine, but in creating American culture,” Harris told The Washington Post. “It’s obvious in terms of music. This is obvious in terms of dance. You could say it’s a no-brainer in terms of popular culture and fashion, but in terms of food, people hadn’t really given it much thought. So I think that now makes people have that thought too.

MOFAD, which has been in existence for nearly a decade, has always wanted to hold such an exhibition. But it wasn’t until 2017, when Harris, one of the foremost food experts in the African diaspora, had the ability to get involved that he was finally set in motion. Although Harris is listed as lead curator, she is quick to point out that a team of people worked on the exhibit. “It was truly a collaborative effort, and we can’t say that enough,” Harris said. In addition to MOFAD’s curatorial staff, an advisory committee of about 30 people, including Carla RoomQuestlove, Toni Tipton Martinand Michael W. Twitterwas formed to make the idea a reality.

Although MOFAD once occupied space in Brooklyn’s Williamsburg neighborhood, the intent was to still house “African Americans” at the Africa Center, located at the crossroads of Museum Mile and Harlem. “It was important to us that this exhibit be housed in an African or African-American institution, and that we were near a historically black area of ​​town,” Piccoli said.

The Legacy Quilt was sewn by Harlem Needle Arts and features artwork by graphic designer Adrian Franks. “The idea was to find 400 people, one for each year during the 400 years that were originally celebrated when we opened in 2020, which would have taken us from 1619 to 2020,” Harris said, referring to the year when enslaved Africans were first brought to America. “There are blank quilt squares to show how many people we just don’t know are being discovered daily.”

Food writer Osayi Endolyn was commissioned to write text to accompany each tile, and those words are displayed on a screen at the exhibit. “It’s sort of become a story-driven piece of writing. And as every writer knows, it’s one of the most important pieces you’ve ever read or written, because it has so much power and power,” Endolyn told The Post. “It was my job to distill a lot of information into a very short space and convey the who and the importance of the what. It was sometimes difficult because you are talking about incredibly deep people, especially in the circumstances that good number of the first digits were in. It’s just astounding.

“The innovation and their creativity and the artifacts that emerged, whether it was people or things or ingredients that we were talking about, it’s such an amazing picture,” Endolyn said. “It’s so easy to succumb to the misinformation around acquiescence in people who lived through slavery, and when you see the entrepreneurial spirit and you see the innovation, it challenges that in so many ways. levels.”

Even as a person with great interest and knowledge in black food, she first discovered many inventions and patents during this mission. “From whatever perspective you are, you always know that even though we are learning, there is still so much to learn and so much that is likely lost,” Endolyn said.

While it is highly recommended to experience the quilt in person to admire its breathtaking expanse, those who cannot can view the Legacy Quilt Project Online and even submit their own African American culinary heroes.

“With this ongoing digital quilt, we are now able, as people find people and people suggest people, to update and continue the quilt. And so it becomes an ongoing process which really reflects that history is not static,” Harris said. As part of this effort, the museum’s education staff developed a guide for teachers and school groups to make their own legacy quilt projects, which has already been used by at least one class.

A media event and exhibitions of friends and family held in the week before the inauguration gave Harris and the rest of the team the first opportunity to see the public response. “It was pretty wonderful,” Harris said. “Hopefully they’ve learned something, thought about things, or found a point of connection that will push him forward and move him forward.”

“African/American: Making the Nation’s Table” is at the Aliko Dangote Hall of the Africa Center in New York until June 19. Click here for tickets.